September 03, 2018
I am diagnosed with schizoaffective disorder, which basically means I have a mood disorder (in my case, major depression) and I suffer symptoms of psychosis like delusions and paranoia. In May of 2016, I suffered my first psychotic break with reality.

My psychotic breaks feel like dreaming while I'm awake. Elaborate plotlines and scenarios overtake my conscious and I react to the real world as if these dreams were real. It's not hallucinating per say, because I don't literally see these images in front of me, but I see them quite vividly in my mind.

In January of this year, I did something very foolish. I quit taking my medication. I was just so sick of pills, and disgusted by the weight gain my anti-psychotics had caused. I'd gone from 115 lbs to 150 lbs, and I know that 150 lbs is by no means fat for my height but I felt so uncomfortable. I wanted my body back. Depression seemed like a manageable monster. I was better, having graduated college and found a full-time salaried job. Some days I felt unmotivated and sad, but I felt that this was due more to circumstance than brain chemistry and the pills couldn't really help me anymore. As for psychosis, I had it in my head that maybe I could control another psychotic break. I could just breathe deep, focus on the present moment, and it would go away.

Yeah, that's not how it happened at all.

I was fine for four months. Then I started feeling... weird. I'd get these cold chills in my head when I remembered my first delusion, the one that still haunts me. Those special chills always feel like the shuddering of floodgates, like I'm on the brink of explosions bursting through my brain. I pushed it down, I pushed it away. I called my sister and my mother, trying to anchor myself to this world.

I woke up Saturday morning with a strange sense of deja vu. Every step I took was destiny. Every turn I took was meant to be. I was on the verge of understanding something fundamental about the universe and my existence, and if I could just breathe and move forward for a little longer then all the answers in the world would be mine.

Then, my mind made a slow slide into complete chaos.

I paced around the apartment, other worlds colliding and cascading through my conscious. Lying in bed, I didn't sleep but I was still dreaming. All of the decorations on my walls swirled together and wove a narrative tapestry. I left the apartment. I wandered around. I went back. I looked down at my bare feet and couldn't understand how they could be dirty.

I was like this for three days. Eventually, I got in the car and drove until I ran out of gas. I remember cowering in the driver's seat while police flashlights shined on me. The next thing I remember is being dragged into an ambulance, writhing and screaming.

When my conscious cleared, I was in what has to be the lousiest psyche ward in the metroplex. And I've been in quite a few at this point, so I have some room to judge. They were sorely unhelpful when I asked for help in contacting my employer, insisting that a hospital work excuse would be enough to keep my job (Spoiler alert: It wasn't), and they stole my $80 renaissance festival shoes.

At the start of this year, I made it my goal to write a first draft of a novel, something that I would polish and make an attempt to get published. But I felt creatively dry. None of my ideas seemed to work anymore. I tried writing for April's CampNaNoWriMo and every hour was a struggle like I've never struggled with NaNoWriMo before. I hated everything I typed.

For a few months, I was certain I'd completely lost my spark. Peaked and hit burnout before I could even lay hold of my dream.

Then the reality break struck like a supernova. As frightening as it was, it was also intensely inspiring. I never want it to happen again, it was dangerous and because of it I lost my job. I could have easily lost my life. But those images, those waking dreams, they ignited my creativity again.

HANG ON is inspired by three major images I saw during my April psychotic break with reality:

I saw a girl in a phone booth, crying hysterically while a storm raged outside. The person on the other end of the line was her soulmate, and she was tearing open time, space, and heaven in order to reach him.

I saw a woman bent over the toilet, vomiting, while her man stood over her. He told her that he'd betrayed her, and they were finished. The woman sunk her teeth into her engagement ring and as she turned towards him, she wrenched her arm out and broke the ring. It generated a shockwave that destroyed the world.

I saw a girl packing a brown leather bag and hesitating before the door of her dwelling. One glance backward, and then she tore through the door. Outside, the apocalypse raged. Four young women in grungy clothes carrying assault rifles met her.

"Do you believe in soulmates?" the leader asked the girl, holding out her hand.

"I do." the girl replied, taking that hand.

There were other images, dozens upon dozens of them, but these were the three that eventually fit together and formed the skeleton of HANG ON.

Since I was diagnosed, I've often questioned why God would do this to me. When I suffered my first break, I was in intensive outpatient care for a major depression episode. Even knowing that some people struggle with depression for decades, I really believed that one day I could leave it behind. I thought I was recovering. I thought I was healing. Then the reality break struck and I felt like I was standing dazed in the rumble of my existence. I couldn't shake the fear that I was really broken this time.

But today, I feel thankful. I'm thankful that I was protected during each of my episodes, especially this last episode where things could have easily gone very wrong, very quickly. The episode gifted me with a story when I was certain I had none left in me. So I guess if I have to have delusions, I'm gonna make them work for me.

I hope it never happens again. I'm taking my medication and I have no plans to quit. But I've had one break per year since I was diagnosed and one of them, the second one, happened while I was taking medication. I am not safe from this demon yet.

Still, even while he hunts me, I'll scribble my dreams into my notebooks and face the long dark road ahead with this hope dancing from the windows of my precious lantern light.

Popular posts from this blog

When Characters "Speak" to You 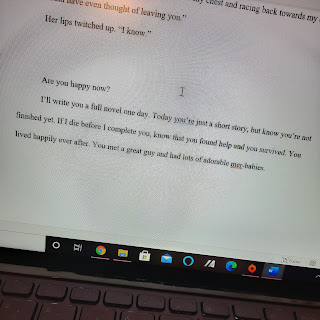 When I listen to other writers discuss writing, specifically the creation of characters and how they shape their personal plots, I've come across a very prevalent mindset/idea. Namely, that characters talk. ....?!?!? Yup. Numerous writers, from the successful and famous doing a televised interview to the obscure blogger that I swap creative ideas with, claim this. They say that their characters talk to them. That they argue. That they won't do what they're told. That they have grown personalities so potent they have an audible voice inside the author's head. And whenever I encounter this mindset, I feel a little left out. But maybe more weirded out. Because it doesn't happen to me. My characters do not (watch me go cross-eyed here)  " speak" to me. Why is it that I feel like *I'm* the crazy one when I say that? Nope. I made them up. They never talk. They never argue. They stay totally quiet when I conjure them in my brain and move them like the little
Read more 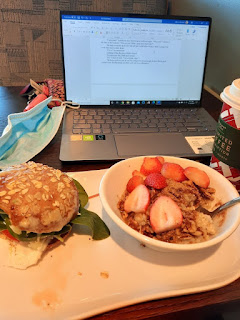 It is now the eleventh hour on November 30th, and with just 20,004 words, I have officially failed NaNoWriMo 2020. The main reason for my lack of progress was an eleven-day hospital stay in which I was unable to write. I was stuck before then, but eleven days without access to writing material was the nail in the coffin. I'm disappointed in myself. I had an ambitious goal and I failed. But I decided to fail as well as I could, and this morning I did a 2,000 word sprint to 20,000 words over a Panera breakfast. I meant to share this news before my hospital stay, but never got around to it. Since it fits with this blog post's theme of failing well, I'll share it now. For those of you who have not heard of Pitch Wars, it's a massive writing competition where writers submit queries and first chapters to potential mentors (who are published authors/editors). These mentors then help the selected mentees polish their manuscripts and queries. Pitch Wars ends with an agent showca
Read more

Make Me Maid of Honor: Meet the Bridesmaids 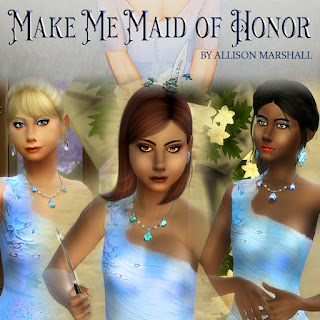 So confession time: I play the Sims. I play the Sims A LOT. I have tried quitting multiple times, and I even managed it for about a year and a half once, but I wound up back at it again eventually. I wrote the first generation of a Sims 3 Bring Me to Life Challenge (dare I show this 2013-2015 project to my friends and family? Eh, yeah, sure, I dare .) and had an absolute BLAST doing it. It was like writing a graphic novel, and that's always been my favorite thing about the Sims. I can create the characters in my head and make pretty pictures.  Anyway, I decided to try out my photoshooting skills in Sims 4 for a change. Dang it , it's so much harder than in the Sims 3! You. Can't. Move. Sims. In. Build. Mode. I'm sure Sims 4 legacy writers and machinima creators have figured out a cheat or a fix, but I've been out of the community so long and I didn't feel like rushing into a group of internet strangers and shouting, "HEY! QUESTIONS!!!!" Maybe next w
Read more